Last spring I received a troubling email from John Pogacnik, long-time biologist with Lake Metroparks. John lives at the Lakeshore Reservation in North Perry, overlooking Lake Erie. He asked if I had noticed a problem with our local beech trees (Fagus grandifolia).

American beech is a staple in the natural woodlands of Ohio, characterized by smooth gray bark even on mature trees that reach 80′. Prickly fruits open in autumn, revealing nuts that fall to the ground and are eaten by birds, deer, squirrels, opossum and other animals. Many woodland citizens also find homes in the hollow trunks. Bragging rights to the tallest Beech tree in Ohio goes to Ashtabula County with a giant at 130′. Along with native maples, beech trees comprise a major component in the vanishing woodland areas of Ohio. Any threat to beech trees is a major threat to our ecology.

For two years, Pogacnik has been monitoring a ‘beech blight’ affecting our local woodlands. Jim Bissell, Cleveland Museum of Natural History, a renowned naturalist who manages over 5000 acres of natural areas extending to Western Pennsylvania, including Mentor Marsh, has noticed the same problem. While ‘beech bark disease’ and ‘beech blight aphid’ have been noted in the past, this appears to be a new threat and Lake County appears to be ‘ground zero’. Samples were sent to The Ohio State University and USDA but no specific identification of the pathogen has been found.

On June 14th we arranged a walk-about at Lake Metroparks Girdled Road Reservation in Concord. Pogacnik indicated this park provided the clearest evidence of the ‘Beech Blight’. John and I were accompanied by Chad Klink, The Holden Arboretum, a well-trained and experienced forester, and Jim Chatfield, The Ohio State University, one of our preeminent tree experts and lecturers in the state. Hikes with the likes of Pogacnik, Klink and Chatfield are always rewarding and lively, especially on such a beautiful early-summer morning. But after a half-mile on quiet shaded trails, Pogacnik pointed out evidence of ‘Beech Blight’ and advised us to look up. Against the sun and blue sky, leaves on the afflicted trees clearly displayed a darker zoning along the veins. This became the visual cue for ‘beech blight’. Early theories involved a virus, eriophyid mites and nematodes (parasitic roundworms). However, as with all scientific problem-solving, the challenge involves separating the vectors and side-factors from essential causes. 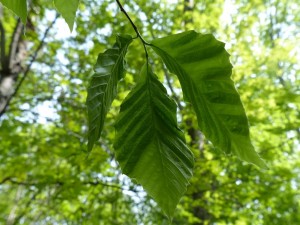 Despite assistance from Ohio Division of Forestry, US Forest Service, and others, the problem remains a mystery. Phytophthora, a fungus wreaking havoc with oak trees across the country, (Sudden Oak Death syndrome) is a primary candidate. Native ash, hemlock and sassafras are under attack by other pests. Don Cippolini, PhD, a researcher at Wright State University and a former colleague from the Ohio Invasive Plant Council board-of-directors, recently announced that Emerald Ash Borer is also attacking native Fringe Tree (Chionanthus) in Ohio. Why so many problems with native trees in Ohio? Invasive pests from other parts of the world are a major cause. Other challenges include climate change, pollution and loss of woodland areas. Trees Matter! says Chatfield in his lectures and articles. What can residents of Northeastern Ohio do about this? We can support local efforts to appreciate, conserve and protect our trees and woodland areas!
Mark's Corner