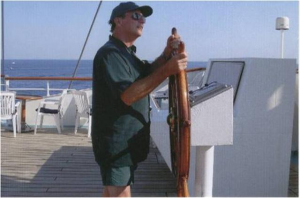 Pretending to sail the WindStar during our cruise of the Aegean and Adriatic in 2007.

I read somewhere that Spring travels north at 16 miles a day. It’s not here yet, but there are signs that it’s getting close…maybe Cincinnati or Columbus. I was in a greenhouse the other day and heard a flock of geese making a commotion as they traveled up from the south. They were more musical than the Canada Geese who overwinter here and I knew immediately that spring was approaching. Snow geese! Stepping outside, I watched as their ragged formation passed over a nearby farm, turned briefly to check out our back pond and then resumed their northward progress towards Lake Erie, a short ways away, probably just coming into their leader’s view. They spend the cold months at the Gulf of Mexico, awaiting some signal, unknown to us, that it’s time to begin their three thousand mile journey to the tundra above the Arctic Circle. I waved as they passed.

The ice on Lake Erie is broken now, drifting in giant flows with open water in between. One day it’s gone, pushed off by a southern breeze. And the next day it’s back, acting like a giant ice cube to keep things from getting too far ahead. I’m reminded of the number sixteen again, for that’s the distance to the horizon on large lakes and open seas.
Nursery trucks are all over the local roads, another sign that Spring is approaching!…loaded with balled and burlapped trees and shrubs from Loselys, Klyns, Yoes and others. Some of the white poly is coming off the hoop-houses at Cottage Gardens and Roemers as crews load containers onto farm wagons.

We’ve enjoyed a few sunny days in a row and I can feel my ‘seasonal mood disorder’ beginning to lift. I feel like a bear or a wood chuck peering outside the cave, eager to begin another year. (This metaphor only works until I reflect that they emerge from hibernation substantially thinner….)

What if I could apply the magic of the number sixteen to my own life…subtracting that many years and reliving my forty-second! Thinking back…I was just entering the most productive and one of the happiest periods of my life! That Spring our nursery was thriving. Our boys were thriving. I was jogging four times a week and feeling better than ever. I totalled our Ford Aerostar Minivan so we bought a used Buick Park Avenue and drove around pretending we were wealthy. Perennials flourished and so did everything we touched. It was a time and an age of renaissance. Even our favorite artists were doing their best, most creative, most reflective work! Sting had just won album-of-the-year for Summoners Tale, at age 43. Annie Lennox had recently come out with Diva (at age 39). Life remained a mystery, but clues abounded and we felt we were on a golden path to somewhere.

Don’t get me wrong. I’m not complaining about fifty-eight.

But the world has been roughed up in recent years and so have we. Business is tough. We drive utilitarian company vehicles now. We seem to keep acquiring more debt, more weight and more doctors with medical specialties. Life is murky, filled with shadows. Everything is relative. (I think I just paraphrased a line from William Golding Freefall) Elusive questions outnumber the hard-won answers. That optimistic and confident forty-two-year-old is a stranger now, a character in some former lifetime.

And yet…life is good. There’s plenty to build upon. We’re more engaged in our communities these days than ever before. We’ve got great friends going through the same things we are. We laugh every day. Bitterness, cynicism and remorse remain beyond our doors. Spring is almost here…a time of new beginnings. I think of Tennyson’s Ulysses, in which the tired warrior and adventurer, late in life, longs again for the sea, for battle, for the unknown: tho’ much is taken, much abides; and though we are not now that strength which in old days moved earth and heaven; that which we are, we are; one equal temper of heroic hearts, made weak by time and fate, but strong in will to strive, to seek to find, and not to yield. (Despite a reference by the embarrassed Illinois Governor Blagojevich in one of his absurd news conferences, this remains my favorite poem, followed closely by Ferlinghetti’s Dog.)
Spring is almost here.

Life is what we make of it. I’m going jogging!