When did the winter get so busy for nurserymen? We need an extra month in the winter to get our work done! 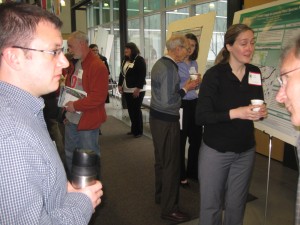 During January, CENTS and the 85th OSU Short Course provided a lively week. Sunday Night at Barley’s Brewery on High Street, I had a great conversation over several pale ales with Jim Chatfield, Keith Manbeck and others about ‘invasive plants’. The show floor seemed a little slow on Monday…but many attendees were listening to Mike Dirr and Bill Hendricks in a Short Course presentation I labeled ‘the battle of the curmudgeons’. Tuesday afternoon I was invited into a closed-door sit-down with OSU Researchers talking about ‘invasive plants’. I’m glad that OSU finally has an invasive-plant-group that crosses colleges and specialty-areas! On Wednesday I was a ‘moderator’ for short course sessions all day. My first-ever short course appearance came as a panel-member on…you guessed it…invasive plants!…along with Theresa Culley, PhD, University of Cincinnati, and Steve Foltz, Cincinnati Zoo. Sorry to Theresa and Steve for taking too long with my warm-up presentation on the ‘background’ of invasive plant issues in Ohio!

In early-February Annette and I did a presentation at the Western New York Nursery and Landscape Association Education Day. This is an annual event for us in Buffalo that we really enjoy. Our presentation was titled: ‘Perennials: The best of the best!’. Annette says it went well and people liked it. Our time-slot was 8:30AM…so I was only semi-conscious and I only have limited recollection. I love doing Powerpoints and we had some good photos from ‘contributors’!

Later in February we attended the ONLA Committee Meetings in Worthington. Another fun time. I ran the Nursery Grower Committee deliberations and filled up four white-boards with obscure script. Annette sits on the Education Committee. Several weeks later I drove back to Columbus for the Short Course Committee, with Bill Hendricks, Hannah Mathers, and a cast of other luminaries. It’s a privilege to sit on that committee.

Somewhere along the line we put together a Buckeye article on ‘nursery recycling’. Mark Shelton,Willoway, Will Hicks, Cottage Gardens, Bill Mainland, Klyns Nursery, and myself, collaborated on a great article.

Late in February Ohio Invasive Plants Council hosted a triennial Research Conference at the OSU 4h Nationwide Conference Center just north of Lane Avenue. Another great time. On the evening before…David Gorchov hosted a dinner for over twenty researchers and speakers…including my son and I!….at a Lane Avenue watering hole. We were joined by Mark Brand, Keynote speaker fromUniversity of Connecticut (an OSU grad and a great guy!)…a half-dozen of David’s grad students from U Miami (Ohio)…and others. The conference involved a ‘poster session’ along with a half-dozen great presentations. What a positive buzz. Too bad this event only takes place every three years. But there’s talk of combining with the Weed Science people and Midwest Invasive Plants Council (MIPN) for an event in Columbus in December, 2013! Lots of other events and meetings! I never got any further than Columbus…but I feel pumped-up and rejuvenated for the Spring!