This article appeared in Gardenopolis-Cleveland in June, 2020:

Ironclad refers to a durable group of Rhododendrons that have proven reliably hardy in Northeastern Ohio.  My favorite among the ironclads is R.’ Nova Zembla’.  I have my reasons.  First, the color in medium shade is a deep passionate remarkable red.  No orange tones.  Not overly purple or pink.  Personally, I think it would make a great lipstick color for women of distinction.  Within the broad blossoms are dark subtle speckled throats and long lashes that beg closer inspection .  I like to enjoy the blossoms in a  bowl of water on the kitchen table.   Second, this is a tough performer with deep evergreen foliage that remained unmolested even through our recent -30 degree winters.  Finally, it blooms at the perfect time for me to enjoy! 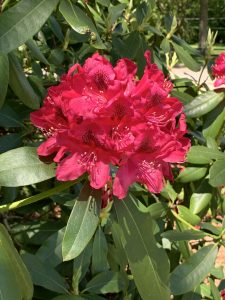 You may have noticed that nursery folks escape to their own self-enforced witness protection program each year from late-March through mid-May.  We resurface for a breath of air and an afternoon off around Memorial Day.  The great thing about Nova Zembla is that it is always waiting for me when I arrive!  We enjoy such an engaging and amicable community of landscape plants here in Northeast Ohio that it’s easy to flit about from flower to flower, overcome with this bounty and the buyer’s paradox of so much beauty, without forming long-lasting relationships with a single performer.  Nova Zembla has been my BFF in a neglected yard for over thirty five years.  Each Memorial Day we reconnect and rekindle our friendship.

I started with a lanky, one-sided leftover from our garden center and planted it in dry sandy shade beneath a limbed-up spruce.  All these years later it remains awkward, lanky, rising to a six foot ridge line with color and healthy foliage on all sides.  Meantime, the spruce is dying a slow death as the brown bottom limbs ascend toward the apex.  I never water (at home).  I might have thrown a handful of Osmocote under the Rhody in some years.  My wife calls the yard a killing zone.  And yet my Nova Zembla prospers and dominates the space.

The variety was developed by Koster & Sons in Boskoop, Holland, and introduced in 1902. They crossed  R. ‘Parsons Grandiflorum’ with an unnamed red,  which sounds intriguing and vaguely scandalous to me.

The name translates as ‘new land’ in some languages.  There is a series of islands high up in the Northern Seas, between Russia and Finland, known as Novaya  Zemlya.  The islands are mostly glacier and tundra.  I doubt there are any Rhododendrons there.   The Soviet Union used the islands for nuclear testing for almost fifty years, including the Tsar Bomba in 1961, largest weapon ever detonated.  In February, 2019, herds of polar bears left the ice and invaded what was left of the islands.  Some blame global warming.  I suspect the bears were out for Tsar Bomba retribution.

I had a nursery friend who told me years ago that they only achieved about 10% successful rooting on their R. Nova Zemblas.  The fact that they kept sticking them year after year offers a keen insight into the nursery thought process.  I toured Roemer Nursery, Madison, Ohio, back in 2009 when the founder, Gied Stroombeek, was still around.  His propagator was sticking Rhody cuttings that day.  She gathered tip cuttings from the stock plants, trimmed each leaf judiciously to reduce transpiration and save space in the rooting bench, then dipped the moistened cuttings in rooting powder.  I imagine it was a strong formulation of IBA with about 98% talc.  She let them air-dry on the worktable until the powder adhered like dried toothpaste.  Then she stuck them in the raised bench of an ancient greenhouse using a long indexed board to keep the rows straight. The rooting mix was mostly fresh pine bark, similar to a modern container mix.  They looked like orderly soldiers arrayed row on row.  With all this labor required of a highly trained professional from the ever-diminishing ranks of the local propagator ‘guild’, perhaps it is not surprising that many Rhododendrons are produced via tissue culture these days.

My wife’s favorite Rhododendron is ‘Edith Bosley’, a classy deep purple, the best purple Rhody in our estimation.  For Mother’s day last year I purchased one for her from Klyn Nurseries.  Through no fault of theirs, it perished within a month.  (Did I mention I never water the yard?)  Knowing her affinity for ‘Edith’, someone purchased for her a small ‘Edith Bosley’at a Big Box store in Mentor (located on land previously cultivated by Paul Bosley, Sr. and his wife, Edith!).  But the promising bud yielded not purple, but deep majestic red! I was overjoyed!  Let the buyer beware of horticultural serendipity.

(There is an entertaining article by Paul Bosley, Sr., regarding how he met his wife, Edith, and how they selected the nursery property on Mentor Avenue:  The Bicentennial Edition Lake County History, Lake County Historical Society, 1976, pages 296-300, ‘Stop 68’.)